Dr. Paolo Maranzana: “The production and circulation of pottery can reveal how people faced global crises in ancient times”

For understanding the long journey of humanity, archaeology has taken advantage of many disciplines ranging from natural sciences to social sciences. Modern technologies such as Geographical Information Systems (GIS) have also helped archaeology to locate the archaeological materials into wider contexts. Dr. Paolo Maranzana, who recently joined the Department of History in Boğaziçi University is conducting research that benefits from contemporary approaches to archaeology. In his project titled “Manufacturing Goods: The Case of Late Roman Pottery Production and Circulation in Western-Central Anatolia,” Dr. Maranzana will research how economic independence contributed to the survival of Late Roman cities (4th – 7th c. AD) in Central Anatolia in the face of large-scale crises that affected the Roman Empire. By using GIS, he will also visualize and analyze further the connection between production centers and the circulation of ceramic fragments in a broad region. 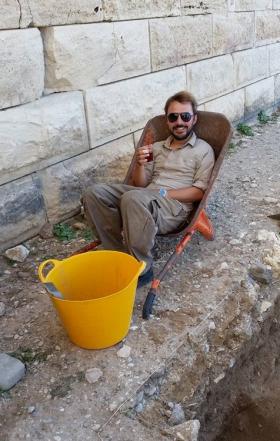 To explain why he chose Boğaziçi for his academic career, Dr. Paolo Maranzana is emphasizing the great reputation, internationality, high abilities of students and high-level of education at Boğaziçi University. Besides, he considers Boğaziçi University as an opportunity to develop his research. Dr. Maranzana’s recent project aims to understand the role of a specific type of pottery, Late Roman Red-Slipped fine ware (terracotta cups and plates used only for eating and drinking), to reveal how people living in Central Anatolia were resisting the economic crisis that affected all Mediterranean during the Late Roman Period. This project will provide new perspectives to ancient economies and help to understand more about our own ways of struggling with any crisis. We conducted an interview with Dr. Maranzana for the details of his research.

Could you please tell us about yourself, your academic background and research interests?

Paolo Maranzana: I completed my Ph.D. at the University of Michigan in Classical Art and Archaeology. In my Ph.D. thesis titled “Urban trajectories and the creation of a new social order in Late Roman Central Anatolia,” I have analyzed three cities in the greater Ankara region as cases and I have discussed them as a system to build a model on how the cities work with the big changes in the regional level and superregional level in the Late Roman period.

I am interested in Roman urbanism between the 4th and 7th centuries. I am researching how urbanism informs us about the significant changes that happened in the period when the Roman Empire was undergoing dramatic changes and struggling in both parts. In particular, I study how economic networks support cities and how cities establish relationships with the production system in the countryside. More recently, I am turning more into environmental issues and I have started to research how economic activities that feed a city impact the natural environment.

My main region is Central Anatolia, in other words, the ancient province of Galatia. Today this region corresponds to the modern cities of Ankara, Eskişehir, Isparta and Konya. Besides, I work at the excavations of Sinop on the Black Sea again on a similar focus to understand how highly intensive exchanges, big economic roads and developments happen through sea transportation. The Black Sea was the main outlet for Central Anatolia, so I benefit from the excavations there for my research questions. For the next summer season, if the pandemic circumstances allow, I will also take several students from Boğaziçi University to the Sinop Kale excavations.

Finally, I am in the process of starting a new project that considers the impact of urban spaces on the natural environment. This will be carried out in collaboration with the University of Bologna/Ravenna.

“Istanbul is a perfect city for anybody interested in different cultures”

What were the reasons for choosing Boğaziçi University for your academic career? When did you start teaching and researching here?

I had been working in Turkey for a while and Istanbul has been always my favorite city in the world. Istanbul is a magical, interesting, exotic and perfect city for anybody who is interested in different cultures.

When I was a post-doctoral fellow at Koç University, I had a chance to move and talk to archaeologists at Boğaziçi. Therefore, I decided to apply for the newly opened position here because of its great reputation. My position at Boğaziçi was approved in September 2019, but I was only able to start teaching at the beginning of 2020. I haven’t been on campus as much as I would like to because of the pandemic. Nevertheless, I am very impressed by internationality, the ability of students and the level of my colleagues. The campus of Boğaziçi is one of the most beautiful places I have ever seen.

I usually teach Roman history and archaeology here. Next semester, I will teach quantitative methods and analysis of spatial data in history. I feel excited because next semester I will also be able to teach a seminar on urbanism and sustainability in the ancient world by covering the relationship between the environment and ancient cities. This is probably going to be the first course in Turkey with such a title. In this seminar, we will look at the impact of pandemics as well and will adopt a holistic approach to the environment. As we experience nowadays, pandemics would impact demography and society. In the seminar, the same phenomenon and the results of pandemics will be discussed through archaeology for the Roman period.

In your recent project titled “Manufacturing goods: the case of the Late Roman pottery production and circulation in western-central Anatolia,” you examine the end of the Roman world in western-central Turkey by questioning whether economic isolation ever an answer to the crisis. How did this project begin? How do you define “crisis” for the period in question?

This project started five years ago when I went to work in Ephesus, which is one of the oldest and the most advanced excavations in Turkey. I had the chance to work with very distinguished pottery experts there and I was learning about different kinds of pottery. I was particularly interested in local production in Ephesus which does not look very nice. Then, I started to question why people would make such pottery during the last centuries of the Roman period. When I move to Central Anatolia, I realized that there is no imported pottery there at all. During the previous centuries, it was relatively common enough to find imports from Syria, Italy even from the Black Sea coasts here. However, when you get to the 5th century, everything becomes local in this region. I thought that this is an interesting phenomenon, so I started looking at a few sites to be sure that everyone is aware of the same type of phenomenon. I got funding from various bodies such as the University of Michigan and Dumbarton Oaks in the United States. This project was also funded by the Byzantine Studies Research Center at Boğaziçi University and a much bigger grant through BAP, which was announced two weeks ago.

This funding from Boğaziçi allows me to conduct a much more structured project. In this project, I will categorize different types of pottery made locally and then create a database. After that, I will look at macroscopic diagnostic features inside the pottery to follow the possible micro-regions that might be production centers. I will analyze red slipped fine ware and the main archaeological site for this analysis will be Amorium in Afyonkarahisar. I will be doing this analysis with Dr. Cristina Mondin, who has been studying pottery for 15 years in this region.

To answer your second question, I define “crisis” as a shock to the system, where the system is struggling to respond. A crisis leads to problems and impacts on the life of people and institutions. Sometimes institutions might change more or less dramatically, sometimes a crisis even leads to collapses. For the western Roman Empire, it was the case as the shocks were too many and too strong. However, certain regions are more equipped to resist. In my opinion, Central Anatolia was one of them in the Late Roman Period and this region was more equipped because it was economically self-sufficient and it did not rely much more on imports rather than exports. Central Anatolia never had very strong ties with other regions, which allowed for a more resilient system against the crisis.

I am still not clear about the reasons for a more resilient system there, so I am doing this project to understand the situation clearly. To me, the development of the regional economy is one of the main reasons why Central Anatolia was more resilient. This can be proved by looking at the quantifiable data on the expansion of rural sites and agricultural production. It is known that Central Anatolia is the only region in Turkey that has a common trend in terms of agriculture. Once you get to the mid-6th century, when a lot of regions decline in terms of agricultural production, Central Anatolia remains at the same level and transforms into the most productive region in Anatolia. In other words, it passes the other regions by maintaining the same agricultural production without much change, which can be defined as a resilient system.

“With GIS, we will be able to see how far the materials travelled”

You will be interpreting the deeper socio-economic ramifications of production, circulation and distribution of Late Roman Red-Slipped fine ware. What are the main characteristics of this ware? How will you use Quantum GIS software in the project?

Red-Slipped fine wares are high quality of tableware used for eating and drinking. They are wheel-made, standardized in shapes, and made in large quantities. Therefore, you can find them in any site from most rural areas to cities. They are also often stamped and slipped with red clay fired in particular ways. The earliest ones are made in Levant, but one type in Italy is produced more than any other especially during the period of Augustus. Many other centers of production appeared throughout Roman history, and some of them reached both international and regional distribution. In the Late Roman Period, 4th - 7th c. CE, some of these important production centers were in coastal Turkey.

In the project funded by BAP, we will be working on categorize the typologies local to the Central Anatolian plateau. We also link our study to a GIS (Geographic Information System), which allows the analysis of spatial data. For this database project, I will work with Azra Koçer, a master’s student in the History Department. With GIS, we will map the provenance and circulation of prominent pieces of pottery and, in this way, we hope to learn more about their production centers and distribution routes. In the end, more interpretation about the wider significance of this ware will be possible.

You have much archaeological fieldwork experience in Turkey. How do you feel about excavating in Turkey?

Sinop is definitely a site that I am attached to. It is a beautiful place and a gorgeous site. I love the extremely friendly community there. I was also very lucky as recently I was asked to give the voice to a National Geographic documentary about Sinop. This documentary is about the contextualization of the Roman shipwrecks that were discovered around 2000.

Finally, I cannot forget my memories in Pessinus near Sivrihisar. It is special for me as I started working in Turkey with this site. I find the geography in Sivrihisar very peaceful, some of the views are quite spectacular there. I observed that the local community is extremely interested in what archaeologists do and local people are proud of their cultural heritage.